Topping-out ceremony of our new building

Topping-out ceremony of our new building

The truss of our new laboratory building at the Erlangen Bioresearch Centre is in place. The topping-out ceremony, which took place on March 21st 2014, was attended by several well-known public figures such as Joachim Herrmann, the Bavarian Minister of Interior Affairs. The completion of the new construction under the direction of the State Building Authority Erlangen-Nuremberg is scheduled for August 2015. The Bavarian State is investing a total of 13.4 mil. Euros for the new building and refurbishment of the existing buildings. The new laboratory complex will be a fundamental component of the interdisciplinary Biotechnology campus on the 9,000 m² site in Ulrich-Schalk-Str. and thus complements the existing buildings, which are going to house offices and seminar rooms for the scientific personnel.

The new building with 860 m² of usable space provides room for interdisciplinary bioresearch of the technical and natural sciences
faculties of the FAU. Three Institutes are going to perform research under the same roof there, namely, our Institute (the Institute of Biomaterials), the Institute of Medical biotechnology and geoscientists of the Institute of Endogeneous Geodynamics.

The centrepiece of the research centre is constituted by a state-of-the-art mass spectrometry
laboratory and four cleanroom laboratories, which are furnished completely free of metal, which enables sample analysis with highly concentrated acids. This feature makes the research centre the first of its kind in Bavaria on this scale. Laboratories for materials science and biotechnology as well as genetic engineering laboratories with safety levels S1 and S2 – complete the laboratory space. (Click images to enlarge) 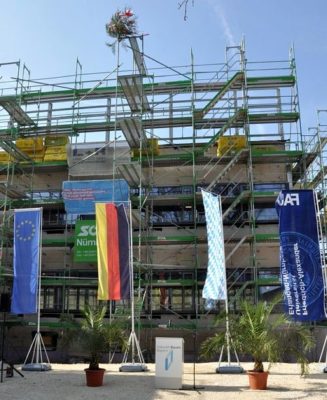 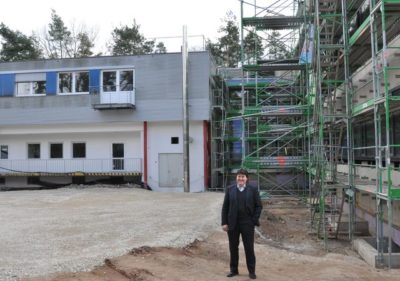